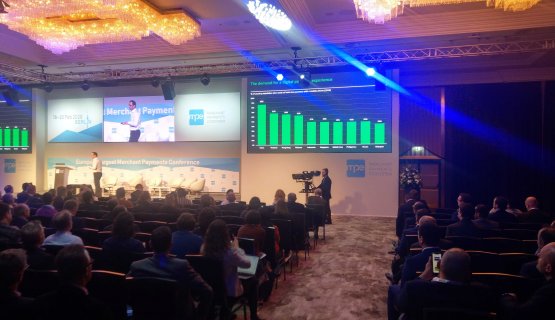 Innovation in the payment sector: Bitcoin, Libra & Co at the mpe 2020

140 speakers, over 300 merchants, 1300 visitors: these are the bare figures of the annual Merchant Payment Ecosystem (mpe) conference in Berlin. At Europe's largest trade fair in the field of merchant payments, high-ranking experts discuss the latest trends and developments in digital payments - with crypto-currencies such as Bitcoin and Libra also being discussed in many areas and this year for the first time represented in a separate track.

The 13th edition of the Merchant Payment Ecosystem once again focused on the key issues of the payment sector: Whether online payments, POS developments, mobile payment processes with credit cards or merchant services, the mpe 2020 impressed once again with an incredibly broad range of different topics from the deep world of payments.

As in the previous year, David Birch kicked off the event, which took place at the intercontinental Hotel in Berlin's Tiergarten. The Innovation Director at consult hyperion is largely responsible for the organisation and implementation of the MPE and is internationally regarded as one of the leading experts on digital money and digital identity. In his usual light-hearted manner, the Briton laid the cornerstone for a three-day conference marathon packed with content.

Almost all experts at the mpe agreed on one thing: there is still a great deal of inconsistency in the European payment sector. First and foremost, the implementation of the European Payment Directive PSD2 should be mentioned here. Developed to promote modern payment methods, the EU directive is intended above all to provide better protection for consumers when making online payments.

While first parts of the PSD2 have already been implemented by 2018, the directive is still lagging in terms of points such as the obligation for customer authentication. In general, this consists of three categories - ownership (e.g. fingerprint/face-ID), possession (e.g. mobile phone) and knowledge (e.g. pin or password). Strong customer authentication (SCA) is particularly important for protection against retail fraudsters.

However, the fact that PSD2 only defines the framework conditions makes standardised implementation in Europe extremely difficult. The combination in which multi-factor authentication must take place is thus ultimately left to the companies themselves. As a result, only six countries in the European Economic Area (EEA) have implemented the SCA. The majority, including Germany, Scandinavia and the whole of Eastern Europe, have so far failed to follow suit.

The example of the Payments Directive PSD2 illustrates above all that the payment ecosystem in Europe is in a fractal state - especially  in terms of consumer protection measures. Moreover, the field is flooded with numerous innovations. For example, authentication for online orders, which is carried out with a bank card and smartphone via NFC, or the payment service providers adyen, that develops software especially for the French terminal provider Worldline - to name just a few special blossoms.

Numerous providers and new technologies were given the opportunity at the mpe to show that the payment ecosystem consists of more than just the big players. It is precisely this small-scale structure of the payment sector that offers enormous potential for disruptive technologies and providers who can take the market by storm. Here, of course, the cautious looks were mainly focused on crypto currencies such as Bitcoin or Libra.

Disruptive potential through cryptocurrencies such as Bitcoin and Libra

In the large payment market, crypto currencies still have a small share, which is essentially limited to the online sector. At the POS in retail, i.e. at the cash desk, the blockchain-based cryptocurrencies tend to be unsuitable due to the inherent disadvantage of blocktime.

The entire industry is deeply relaxed here, as it knows from long experience that in the payment world the frequency for changes and innovations is the decade. Even though the advance of the mobile payment solutions Alipay and WePay in Asia actually speaks a different language.

As if one had not been able to learn at least something from innumerable other areas and industries, merchants and payment service providers are making the fatal mistake of waiting for a customer demand in the payment area as well. In fact, this view only justifies their own inactivity and aversion to innovation, which will ultimately only lead to one thing, namely that new providers can conquer the market with new technologies in a coup de main.

Crypto payments with Bitcoin, Ethereum or perhaps even Facebook's Libra will be far superior to conventional transactions in terms of technology and costs and will not carry the obstructive ballast of the system and provider-side complexities of the current payment ecosystem.

Blockchain-based national currencies can also play a decisive role here and ensure strong growth. And this despite all the reservations of the European central banks about Facebook's crypto-currency Libra, which essentially results from the aspects of a global currency that should be represented by the international currency basket.

Meanwhile, the beneficiary of the hot debate about Libra or the Chinese crypto-yuan could be Bitcoin. The relevance of payments based on Bitcoin seems to have become increasingly relevant since last summer at the latest.

Merchant and Payments - the future of Bitcoin and BitBucks

This is also shown by the growing number of providers for payments with Bitcoin. @BitPay was also represented at the mpe with its co-founder Antonio Gallippi. The British company @Wirex is building a bridge to established players in the payment sector and is showing respectable success with its crypto-visa card.

The Bitcoin Wallet from BitBucks also plays a significant part in this positive development and offers an ideal solution for local retailers with its POS payment app for iOS and Android. As a panelist in the "Blockchain, Cryptocurrencies & Merchant Payment" track, Frank Meier, founder and CEO of BitBucks, discussed the future of Bitcoin and Co. as a means of payment together with Wirex Co-Founder Georgy Sokolov, PumaPay CEO Yoav Dror and Harry Behrens of Daimler's Blockchain Factory.

All in all, the Merchant Payment Ecosystem Conference 2020 once again set the tone for the upcoming decade in the field of payments. However, the dynamic development of the past few years indicates that the payment ecosystem will continue to grow, not only in Europe - in terms of quality, but above all in terms of complexity.

The time is right for crypto-payments. It is just not yet clear which company will take the leading role in this area in the future. However, there is a good chance that @Facebooks @Libra, as a disruptor, can become the dominant provider in the payment sector within a very short time.