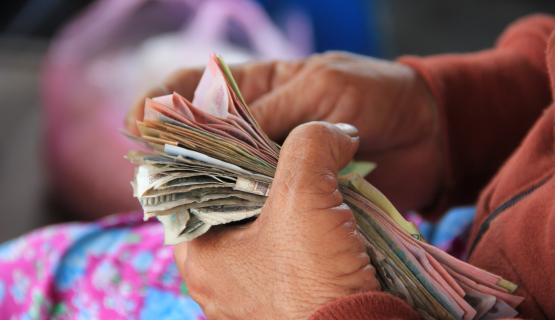 Every state currency loses value over time because the money supply grows uncontrollably. With Bitcoin, on the other hand, an algorithm defines how many monetary units there are. This makes the digital currency a precaution against inflation

Did you know that all state currencies have lost most of their value over time? The euro, the dollar and the pound used to be worth much more than they are today. This is shown by the comparison with gold.

For other currencies, such as the Turkish lira or the Russian ruble, it is even more obvious. And in Venezuela's Bolivar, you now have to transport the banknotes with a wheelbarrow to buy a cup of coffee. For those who don't buy stocks, real estate or precious metals, this is quite unpleasant: the money you earn is almost melting away. Isn't that unfair?

But also in Europe or the USA this is annoying. The money that you stored in your bank account a few years ago has lost purchasing power; and if you fail to push through a salary increase with your boss every year, you earn a little less every year.

None of this happens with Bitcoin. The crypto currency is built in such a way that there will only be a limited number of coins - 21 million. This amount will be distributed over time, the amount the miners put into circulation will decrease every few years. There are currently about 16.5 million Bitcoin. Since the creation of new coins is mathematically regulated, we always know how many coins there will be in the future.

Wouldn't that be great - money for the whole world that is also stable? Money in which the people of this world can store their values without being afraid that it will become worthless? With Bitcoin there is exactly that.

Some people ask where you can be so sure that Bitcoin won't even have more than 21 million units. The answer is quite complicated. The bottom line is that Bitcoin is a decentralized system. When the miners - they create the new coins - change the algorithm, they are simply no longer a part of the network.

Other people complain that money that is not inflationary disturbs the economy. Approximately two percent, they say, is healthy inflation. If it is lower, nobody spends the money anymore, but only hoards it. We are not experts, but we think that this is nonsense. Why should money no longer be used just because it retains its value? And if - wouldn't it be better to do without too much consumption if you only bought things because the money wasted?

For those who don't want the money to lose value, but want to save their income with it, that shouldn't matter. For them, Bitcoin is a good tool for storing values.