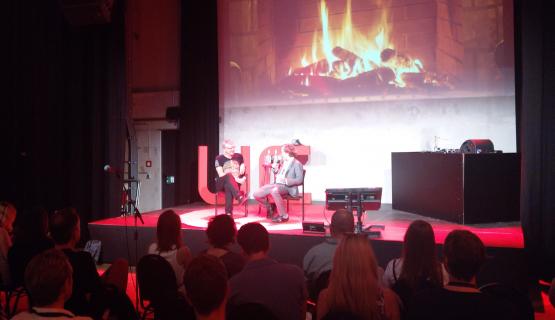 Perspectives for Bitcoin at the UNCHAIN 2019

On June 14th and 15th the second UNCHAIN Convention took place in Berlin. We attended and enjoyed the most important crypto event in Germany.

UNCHAIN is more than just a conference. With its partners, the laBITconf in South America and the Baltic Honeybadger in Estonia, UNCHAIN is an international cultural event. The visitors should not only learn about Bitcoin – they should enjoy their stay and get a feel of the local spirit. This was exactly what attracted us from BitBucks.

The location was at the cultural Berlin Holzmarkt, directly at the shore of the Spree, where a colourful crowd of Berliners enjoyed the sun. Despite an excellent set of speakers less than 200 people attended, which was intended by the organisers Oskar Giese, Sebastian Dröber and Aaron Köenig to create a familiar atmosphere.

If you compare it with last year’s UNCHAIN, the focus moved from a broader view on cryptocurrencies – namely altcoins – to bitcoin. If you look at the trend of the Bitcoin Dominance Index, which represents the share of bitcoin of the whole crypto market and is rapidly on the rise since early 2018, this was a wise and consequent decision.

And with Bitcoin, the focus was, as it is mostly these times, on the Lightning Network. The speakers, like early adopter and Blockstream developer Christian Decker, presented the progress of Lightning with several charts – the channels, the nodes, the capacity and much more. Max Hillebrand from WorldCryptoNetwork.com talked about Lightning, privacy and how you can enhance it, for example by exclusively accessing Lightning through the Tor network.

Beside this, the visitors could learn about many perspectives on Bitcoin; the improvement of its cryptographic base with Schnorr, the endless possibilities of smart contracts based on multi-sig with Max Keidun from Hodl Hodl and much more. The UNCHAIN convention was an impressive demonstration of the agility and vibrant creative power of the Bitcoin community, and it clearly showed that Bitcoin has not reached its peak, but just started. The enthusiasm is back, if it ever was gone.

One highlight of the second day’s speakers was Hans-Werner Sinn, former director of German economic think tank Ifo Institutes, one of the most prominent German economists. Sinn admitted that he knows not much about cryptocurrency and consequently talked about a currency he knows much more about; the euro. Sinn explained the history and inherent problems of the European common currency.

Another impressive appearance was Brock Pierce in a fireside chat with Aaron Koenig. Pierce, a jack of all trades in the crypto economy, talked about his career, which started as a child actor, his countless investments and activities (like EOS, Tether, Blockchain Capital, and, in the future, the rebirth of Mt. Gox). It was a pleasure to listen to him talking about his activities and presenting his inspiring attitude to many things. Because of the numerous unregulated, but fully integrated US-banks, Pierce selected Puerto Rico as his residence. He invited the crypto community to do the same – to settle in this “paradise” and work for the welfare of the local public.

Prior to Pierce, Tone Vays, the human incarnation of the bitcoin price on YouTube, entered the stage with a furious plea for Bitcoin based on its history and unique properties. Other coins? Just shitcoins for the Bitcoin maximalist. While being vivid on stage, he seemed to be exhausted during the rest of the conference, maybe because of the many flies and conference attendees this summer.

Andrei Martchouk had to pass the unrewarding quest to be the next speaker after the fabulous Brock Pierce. Seemingly in contradiction to the services of his company KI Decentraliszed, he talked about the sense and futility of the terms “blockchain technology” and “enterprise blockchains”. His conclusion; the next Bitcoin will be Bitcoin.

Coming back from this open and diverse environment of libertarians, Austrian economists and freethinkers, the soon to come announcement of Facebook’s Libra coin appears like the full antithesis. It’s not about blockchain, it’s not about privacy, and it’s not decentralised. It’s not Bitcoin.

BitBucks supported the UNCHAIN convention in 2019.